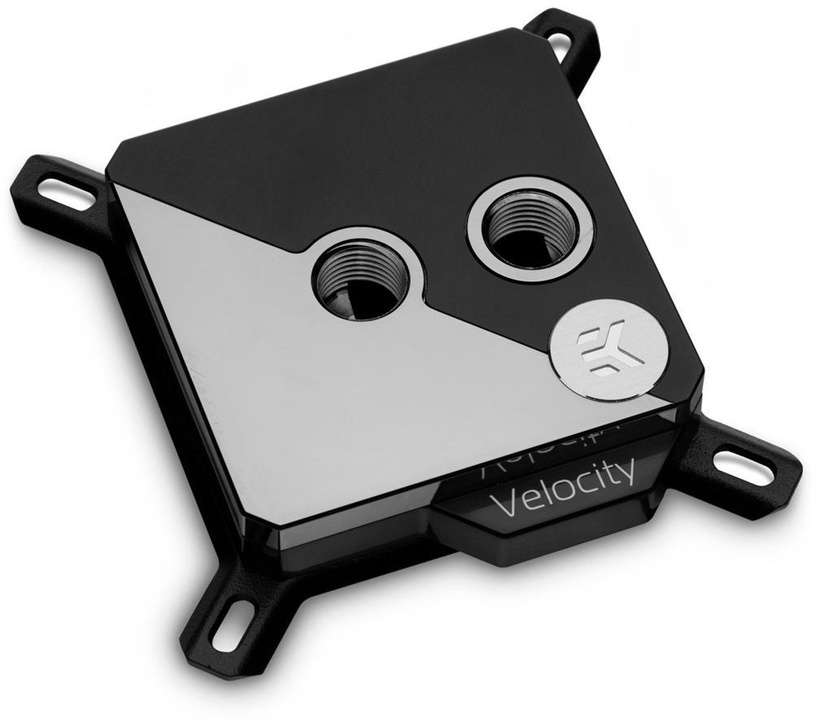 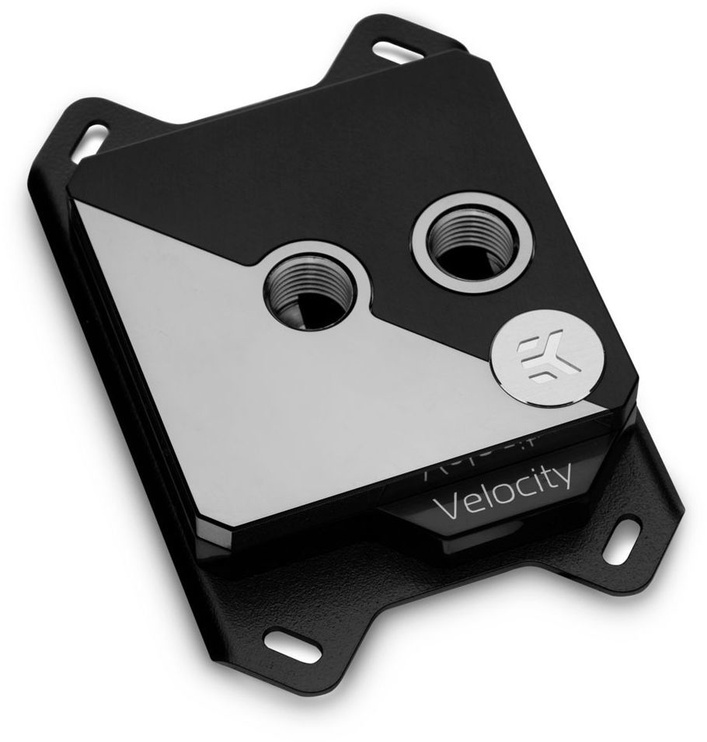 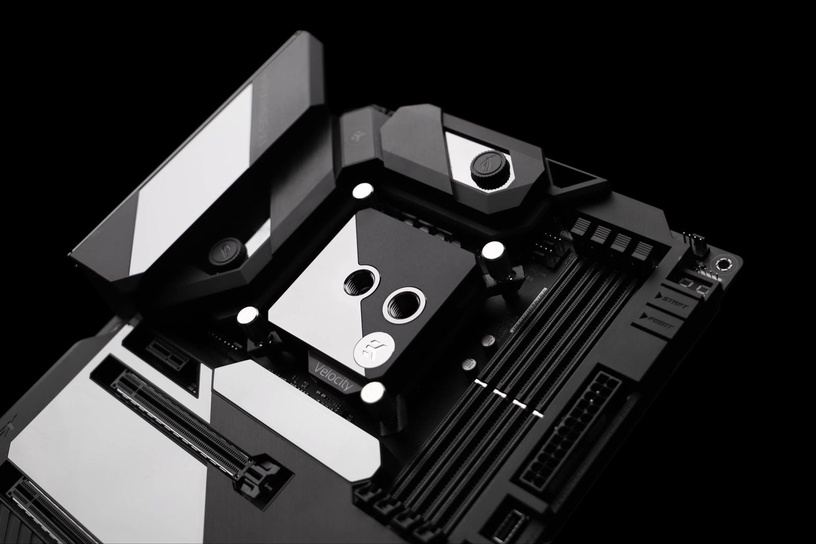 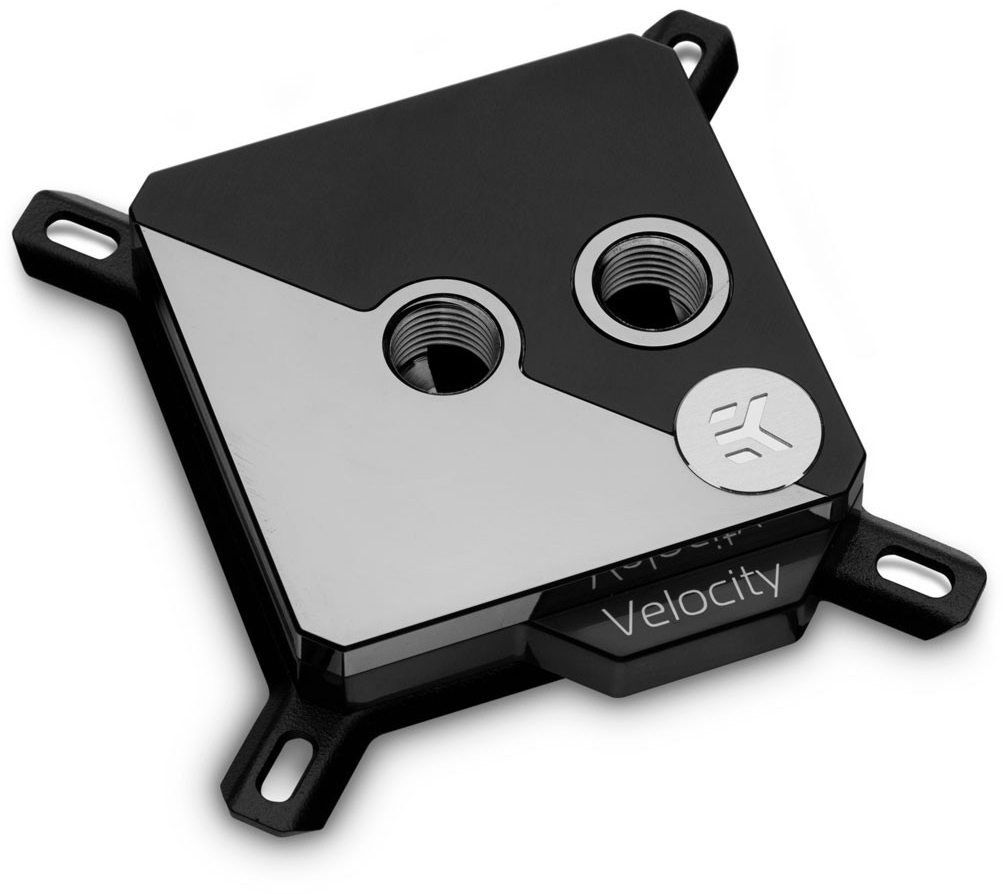 EK-Velocity Strike is a new variant of the EK-Velocity, a high-performance flagship premium quality CPU water block for modern Intel and AMD processors. It features a newly developed aesthetical top with a diagonal strike-through design mixing black nickel and black for an elegant and striking look. The design with a 45-degree line across the center of the block perfectly matches certain high-end motherboards that are on the market today.

The top is CNC machined out of a solid piece of brass which is nickel-plated black, while the aesthetic cover piece of aluminum anodized in matte black. The purest copper available on the market is used for the EK-Velocity Strike cold plate which is precisely machined to a dense micro-fin structure. The contact surface itself is machine polished for better contact with the CPU IHS.

The new cooling engine is characterized by the top-integrated jet nozzle which is combined with a thicker jet plate allowing a more precise bow control. The simplified water block structure offers a more optimized coolant flow and easier maintenance, while the interchangeable thick jet plate ensures the best contact surface for mainstream and HEDT Intel platforms.

The block is equipped with a reinforced hold-down bracket, and the enclosed mounting kit includes all the necessary mounting screws, mounting springs, an Intel 115x backplate, an AMD AM4 backplate, rubber backplate gasket and a small tube of Thermal Grizzly Hydronaut high-performance thermal paste. The EK-Velocity Strike CPU water block features a universal mounting mechanism that offers error-preventing, tool-less installation supporting Intel LGA-115x and LGA-20xx sockets out of the box. The mounting screws are streamlined and are even smaller than before for an added aesthetical perfection. The user has to replace the mounting bracket in order to mount the water block to AMD AM4 socket motherboards.

The product features an RGB illuminated EK logo which connects to a standard 4-pin 12V RGB header. It is compatible with all popular RGB sync technologies from all major motherboard manufacturers. The arrow marking on the 4-pin LED connector is to be aligned with the +12V marking on the RGB header.

Made in Slovenia - Europe!

EK-Velocity Strike is a high-performance flagship premium quality CPU water block for modern Intel processors. It features a fresh design that will enable a vast number of variations and options for enthusiasts and demanding users as well!

Velocity series water blocks are part of the EK Quantum Product Line that emphasizes minimalistic, elegant design, and performance. For those who want to stand out!